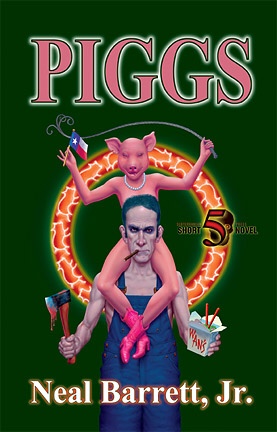 The dustcover describes Piggs as the Sopranos in overalls and bare feet, but a better comparison is Carl Hiaasen’s fugitive Florida Governor Clinton Tyree (otherwise known as Skink) or Tampa-based Tim Dorsey’s Serge A. Storms in Texas. Nearly every character in this story is a lowlife no-good son-of-a-Beyhiver, and many are murderous, but good wins out in the end and everybody gets what they deserve. At the heart of the action are Jack, an ex-con who dreams of a better life while washing dishes in a takeout Chinese joint next door to the strip joint of the title, and Gloria, the dancer of every man’s fantasies, who lives in her family’s abandoned theme park. Along for the ride are Cecil R. Dupree, a redneck mobster who runs the little town of Mexican Wells, and his band of merry pranksters, Grape and Cat, as well as the suave Ricky Chavez, who pines for Gloria with boxed chocolates in his hand and French condoms in his pocket. The story follows a number of conventional lines, but the characters are so memorable that readers can forgive author Neil Barrett, Jr. for treading trails that have been trodden for a long time.