Good News: WanderLost has a new cover and a release date!

I was so pleased to hear from author Traci Highland that her excellent novel, WanderLost, has a new cover and a release date of September 21, 2019! 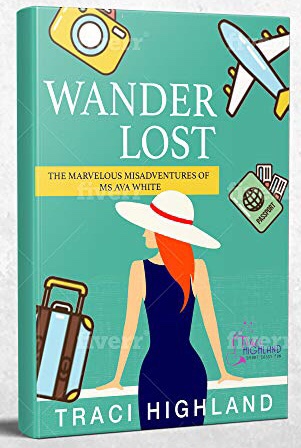 Here’s my review, which I posted when the book was still in limbo:

Ava White is a anxiety-ridden single mother living in Humble, Texas, who’s barely coping with the fact that her father, Raul, who has lived a few houses down for years, has moved to an assisted living facility. So when he vanishes without his medicine and no word of his destination, Ava frantically divines from his book collection and lifelong obsession with archaeology that he must be on a pilgrimage to his earthquake-devastated Spanish hometown, San Judas de Tadeo. The only way to get there is a train that climbs the mountain once a week, or join a hiking expedition that will get there in a matter of days. Guess which one Ava chooses.

While she painfully climbs the peaks and fights her attraction to Borja, the handsome tour guide, a loud-mouthed bully at the assisted living facility, Mr. Thompson, accuses her departed father of terrorism and reports him to a shady anti-government group, the Texas Star. They, too, pursue Ava’s father, convinced he’s on his way to a treasure stash that should be theirs “for the greater good of Texas.” The Texas Star’s involvement alerts the FBI, and suddenly a lot of Americans are scouring the Spanish mountains in search of Ava and Raul.

Along the way, Ava is joined by her daughter, Emma; her long-lost mother, Sunshine; Texas FBI agent Geoff Johnson, Emma’s devoted swain; the attentive Borja, who prefers Ava to the big-haired, tightly-attired, gold-digging man-hunters on the hike; and threatened by the menacing Paul Hagen, a Texas Star thug who tases her and a singing goat (who only bears love and good will in his tiny goat heart), then drags Ava through dry stretches of mountain on the hunt for the mythical bounty. The sudden return of her mother, who was banished for endangering her daughter’s young life, amps up Ava’s ever-present panic, but she pushes on in search of Raul, determined to find her beloved father before he dies alone in the dust of San Judas de Tadeo.

Ava relates her journey in anxiety-riddled frenzy tinged with wry humor, and it doesn’t take long to understand that the staccato narration represents her jittery view of life — always throwing her a wicked curve ball to catch without a mitt. She’s spent her life devoted to her father and raising her children — her husband bailed early in the marriage — and Raul’s disappearance is her mental breaking point. Following her emotional and physical journey is exhausting, but it also lays bare just what gives Miss Charity Ava White the strength and humor to persist despite her paralyzing fear, and her story is a satisfying conquest of personal demons and realizing the joy of finally living for herself.