The Return of Betty Snickerdoodle 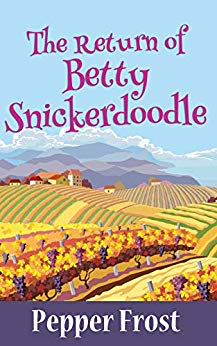 Bea Sickles is a cantankerous old lady — she lives alone in a shabby Napa Valley home cluttered with stacks of paper; wears her nightgown all day and thinks dressing up means velour track suits; cracks bawdy jokes; types her manuscripts on an IBM Selectric; and lives on pizza, fast food breakfast sandwiches, and iced coffee. By every definition, she’s a hermit, rarely leaving her small house, unless she wants to empty pockets and flirt with her friend Perry at Valley Card Room, where she plays a mean hand of Texas Hold ‘em. No one would ever guess that this ribald recluse is the author of the Treacle Town books, a sentimental Christmas series authored by the sweet, pseudonymous Betty Snickerdoodle.

Trouble comes when Bea is attacked by a young man named Cash, who claims to be the son of Charlie Carter, her longtime agent. He demands she hand over her latest manuscript, but there isn’t one. She fends him off by summoning the police and calls Charlie to ask what’s going on, but all she gets is his answering machine. Later, when she and her assistant, Angela, stop by Perry’s place to play a few hands and fool the regulars, Cash breaks in and grabs one of the stacks, a parody book Bea wrote years earlier, meant only for her and Charlie’s eyes. However, Cash hires a tech wiz, Aseem — a friend of Angela’s — to help him rush Sleigh Ride to Hell to publication, so he can turn a quick, dishonest profit on someone else’s work.

Angela and Bea had already been planning a new book, but Cash’s theft prompts them to not only speed up publication, but undertake several radical steps in order to reestablish Betty’s authenticity. In the process, Bea blossoms from a cranky caterpillar to an affably colorful butterfly, proving that it’s never too late to spread your wings, buy some fluffy sheepskin boots, and embrace the Betty Bros.