Confessions of a Counterfeit Farm Girl 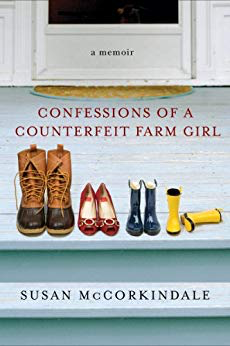 While Susan McCorkindale’s story of adjusting to life on a 500-acre beef farm in rural Virginia after leaving suburban New Jersey is funny, the monumental culture shock she experienced permeates her narrative.

She mourned the lack of a Starbucks and feared the ratio of guns to residents, worrying that she’d have to clad her sons in blaze orange to keep them from being shot. It was hard not to laugh as she described how she and her husband, Stu, struggled in the mud to free the tractor. Not accustomed to the South’s obsession with evangelical Christianity, the family devised a game called “spot the religious billboard.”

However, for all the snark hovering just beneath the surface, McCorkindale plainly comes to love her new home, as she and her sons still live in Fauquier County, Virginia 11 years later.

Note: in April 2011, Stu McCorkindale passed away after a battle with pancreatic cancer.