Give us a brief summary of your lives till now (education, work, etc) and how it led the two of you to write. 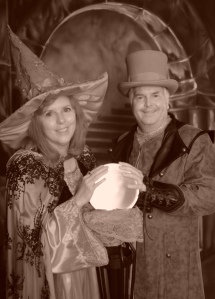 Since I (Morgan) will be writing for both my husband and myself, I will be referring to us by name and in the third person because I think it will make it less confusing. Maybe.

The cozy writing team of MK Scott is actually a married couple with five adult children and numerous grand cats, grand dogs, and one dedicated canine companion. Scott is a full-time software engineer while Morgan has retired from special needs education to write full-time.

The pen name MK Scott came about when Morgan wanted to write cozy mysteries, but her publisher only wanted romances or romantic suspense novels. The pen name is a combination of Morgan and Scott’s names. Sleeping Dragon Publishing is the creation of the two.

Before the MK Scott brand came to be, Morgan and Scott worked together on various novels. Usually, they would brainstorm a novel. Morgan would write a rough draft, then Scott would edit it, often adding the technology details or male dialogue. It would go back to Morgan who would tweak it some more before sending it off to the editor. The same process continued with the MK Scott brand. Scott gets credit this time around. 😊 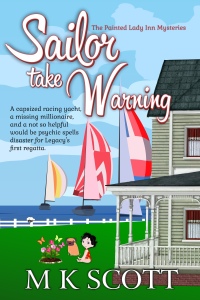 What prompted the Painted Lady Inn mysteries and the Talking Dog Detective series? Why did you decide to spin off the Way Over the Hill Gang series with Herman from Painted Lady?

Morgan is a big fictional mysteries and Midsomer Murders fan, which inspired her interest in cozy mysteries. She has always wanted to have a bed and breakfast in North Carolina. So, in a way, the character Donna is living out Morgan’s dream, complete with solving crimes.

Most cozy authors only have about four books in a series, then spin off another. Morgan kept that in mind when sending Herman to Indiana for the Way Over the Hill Gang series. She also wanted to use her experience of working in a retirement center and illustrate that seniors are very capable of resolving cold cases and catching the bad guy.

The two of you write as a team. Please tell us how you divide duties.

Together, they decide on covers, titles, brainstorm, and do personal appearances together.

Currently, another book in the Talking Dog Detective Agency for Christmas is in the works. It is called On St. Nick’s Trail.

It takes place in Santa Claus, Indiana, which is part of Morgan’s childhood. The premise is a beloved Santa actor has vanished under suspicious circumstances and Max and Nala are on the trail.

There is a common expression about writing what you know. Morgan and Scott instead go with write where you can actually visit. Many details from various books are from trips they’ve taken. With the Quarantine, most research is limited to online currently. Although, they can still experiment with recipes at home.

Technically, Morgan has an office. Since she works on a laptop, it goes everywhere from the kitchen table to the waiting room of the dentist’s office. Every now and then, when Morgan doesn’t have her laptop, she’ll make notes on her phone and send them as texts to herself.

The workday is usually from morning to dinner. It can shift depending on deadlines.

Generally, there is an idea of how the story should go, but it often changes mid-story or even at the end causing major rewrites.

The characters are quite verbal such as Heloise in the Way Over the Hill Gang series. Some want more of a major role or be shown in a more favorable light.

What do the two of you like best about being a writer? What do you like least?

Least favorite of both is deadlines, especially when they seem too near.

What little personal quirk(s) would you like to reveal to your readers?

Morgan acts out scenes to see if they are possible.

Scott never ends a sentence with a preposition.