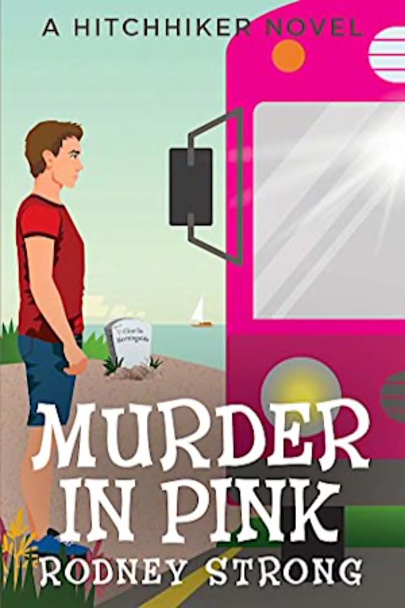 Oliver’s newest hitchhiker is a 15-year-old boy who’s appeared to defend a distant descendant who’s been accused of murder and fraud. Charlie Morningside died in 1922 and has come back to help his many-greats niece, Toni Schaef, who’s been accused of murdering her boyfriend in the pink bus they occupied together. And while she vigorously defends her innocence, the fact that that she’s less than forthcoming with the truth doesn’t help her case.

However, Charlie will have none of this, so Oliver and Amanda, who has ventured back to New Zealand for her grandmother Alice’s birthday party, set about investigating. Toni’s bid to honor her mother’s cancer death with a run around the island to raise awareness funds has attracted press attention, and, as the two of them discover, a trio of criminals as well, including Darcy, a woman whom Toni considers an old friend, but Darcy views more as an ATM.

Toni’s airy naivete doesn’t help matters – a pink-bus-dwelling twenty-something New Ager, she can’t bring herself to believe her “best friend” stole from her, nor that she hadn’t found true love in only three months with the murdered boyfriend, instead of a con artist who zoomed in on a target.

However, as Toni becomes a likelier suspect, Oliver learns something stunning: Toni also has a hitchhiker, although she calls them a rebounder. Their identity is even more surprising: Dorothy, who Toni refers to as “my great-something-grandmother.” In other words, Charlie’s kid sister.

Although Oliver’s not pleased to be caught in a century-old case of sibling rivalry, the Morningsides prove themselves a formidable pair, working together even when it seems they’re at cross-purposes. Getting to the bottom of this twisted tale of theft and revenge is a most satisfying family excursion.