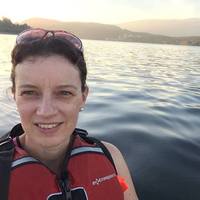 Give us a brief summary of your life till now and how it led you to write.

I was born in Belgium in 1974, in the Flemish city of Antwerp. Belgium is a multicultural country where people often grow up speaking multiple languages, such as French, Flemish, English and/or German. That means that, straight from the beginning, I was introduced to languages.

I also moved around quite a bit. I spent my teenage years in Africa and my middle school was located across from a wonderful library where I discovered a love for reading. I lived many years in Mexico, where I met my husband, as well as spending some time in Scotland and Arizona.

I currently live near Vancouver on the West Coast of Canada with my husband, two children and an intrepid cat.

As for education? Well, you’ll never guess what I studied … I have a Bachelor’s Degree in Translation (English, French and Spanish). Surprising, isn’t it?

The reason I tell you this is because I had a bit of fun referring to “translators” in my Alien Skill Series. When you read the books you’ll know what I mean … 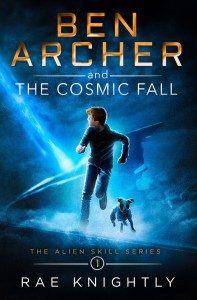 How did the character of Ben Archer come to you?

I wanted to explore the life of a young protagonist who starts off vulnerable and innocent, but then grows into a focused and likeable hero.

I enjoy placing normal characters from today’s world in completely unusual situations. And by unusual, I usually mean that I take them travelling to fantastical and surreal places.

The alien, Mesmo, was actually the first character I created.

In my mind, the fact that this humanoid is tall refers to the fact that he comes from an advanced civilization, whereas his twelve-year-old friend, Ben, represents our young and blossoming human species.

You’ve travelled all over the world. How has that affected what, where, and who you write about?

Travelling has been key in my writing. Every country and every culture has something to offer and if you keep your mind open you’ll enrich your life in ways you could never imagine. It also showed me how precious our planet is and how important it is for us to protect it.

Ben Archer also travels (way further than I’ve ever been). Endless landscapes that allow your eyes to wander are important features in The Alien Skill. Visiting the Earth from an alien’s point-of-view allows the reader to marvel at wonderful places that are either real, or border on fantasy and dreams.

I decided to set the beginning of the story in and around Vancouver, because the region offers these dreamy landscapes, but it has been extremely fun to set the stories further and further away to exotic places and even into outer space.

I am currently preparing to publish book 5 in The Alien Skill Series on September 17, 2020. The book is called Ben Archer and the Star Rider. In it, Ben is kidnapped for his ability.

Book 6 is called Ben Archer and the Toreq Son and will close off the series (unless the aliens have more tricks up their sleeve). In this last book, humans are faced with an imminent alien invasion.

I will then focus on a new science-fiction story called The Lost Space Treasure.

Fortunately, we live in the era of the internet.

I do extensive research on the web and am often inspired by short articles that fascinate me, like the discovery of ice geysers off of Saturn’s moon, Enceladus, or the closure of illegal “orca jails” off the coast of Russia.

Google Maps has also played a big role in my search for story locations. That’s how I came to set Ben Archer and the Alien Skill in the city of Canmore off the Canadian Rocky Mountains, and how I found out more about Dog Fountain in Toronto for Ben Archer and the Moon Paradox.

When I need more precise information, I will ask for help in author groups on Facebook, I will ask guidance from sensitivity readers or contact organizations directly. For example, whales.org helped me determine the types of whales I should use in Ben Archer and the World Beyond.

Beta readers and my editor also play a fundament role in providing a high-quality story, as they point out flaws in the plot or ask questions that force me to rethink certain aspects of the story. 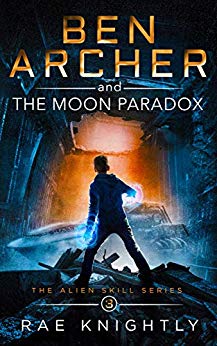 That’s what happens when you run a household and drive kids around to their activities. I’ll write when everyone’s asleep, when there’s a downtime or in my car, while my kids are at their swimming lessons. My computer follows me everywhere so I can write anywhere and whenever possible.

My favourite place to write is at a coffee shop or at the library.

I’m definitely a plotter. I outline the story in an Excel spreadsheet. That way, when I have some time, I’ll open a Word document and immediately know where the story is at and where I’m headed. It saves me a lot of time.

I was introduced to worlds of magic, fantasy and science-fiction through Susan Cooper’s The Dark is Rising, Monica Hughes’ Earthdark and Lois Duncan’s Stranger with my Face.

I devoured Terry Brooks’ The Shannara Chronicles, The Ice People by Rene Barjavel, Island of the Blue Dolphins by Scott O’Dell and Paulo Coehlo’s The Alchemist. These stories often combine the real world with elements of magic and wonder, which is something I strive to offer in my own books.

The most satisfying thing about being a writer is seeing the story you had in your head printed out on physical paper. It’s extremely rewarding to turn thought into reality.

What I like least is overcoming writer’s block. It hits me when I least expect it. For Ben Archer and the Star Rider, I had a major writer’s block just when I was about to write the last couple of pages of the story. I couldn’t believe I got stuck right near the end!

Writer’s block usually surges when I start doubting myself and fearing I didn’t write a good story.

Fortunately, I’m learning not to pay too much attention to that nagging voice and once it calms down, inspiration flows again. 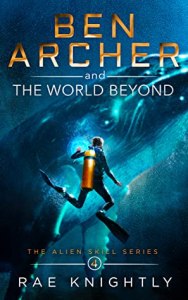 Quirk? Who said I had quirks? Haha!

Kidding aside, I’m an extreme introvert and hate taking selfies. I’ll rarely post pictures of me and I’m barely stepping into the limelight, doing online readings of my books (eek!).

I’m terrible at random conversations, so don’t try chatting with me, you’ll be disappointed. I’d much rather stay in a comfy, quiet corner in my home, thank you very much.

English major and former librarian, I'm a lifelong reader of just about anything in print. I read widely, but my favorite genres are cozy mysteries, post-apocalyptic novels, and any book featuring dogs, cats or any kind of animal. I'm not a fan of steamy romance or erotica, and I've developed a taste for independent writers since acquiring a Kobo e-reader and Kindle. I beta-read for several authors, but have no fiction-writing aspirations of my own; to quote author Tim Kreider, “I don’t know how to reconcile the necessities of plot with anything resembling real life. I just don’t understand life well enough to make things up.” View more posts