Fire in Paradise: An American Tragedy 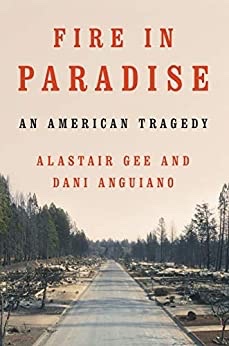 The 2018 Camp Fire destroyed the Northern California town of Paradise and the nearby community of Magalia, when the combination of high winds, arid forests, and the multiplying forces of climate change turned what should have been a controllable wildfire into a raging firestorm of such epic proportions that Paradise, California virtually vanished from the face of the American West.

Beginning on November 8 when a hook broke on PG&E transmission tower 27/222 sometime after 6 a.m. PST, winds at at near-hurricane strength spread embers that started several small fires. Shortly after 6:30 a.m., Cal Fire employee Matt McKenzie received a text about a tiny blaze off a dirt track known as Camp Creek Road (which gave the fire its name). It was in a difficult-to-reach location on the opposite side of the North Fork Feather River and inaccessible to his fire truck, so McKenzie ordered other engines and bulldozers to the site to wrestle the fire under control.

According to a patrolling aircraft, the inferno reached Paradise at 8:01 a.m. Although thousands of robocalls, text messages, and emails were sent to residents, less than half of Paradise’s population had signed up for the notices and therefore received no warning of the oncoming firestorm. Those who did, such as Feather River Hospital’s ICU manager, Allyn Pierce, had to devise hasty plans to evacuate; Pierce’s focused on patients in varying levels of acute distress. After evacuating the ward, he and fellow staffers left the hospital in his Toyota Tundra pickup but found themselves stuck in traffic with flames on both sides of the road. The others fled, but Pierce stayed behind the wheel, determined not to block others by abandoning the truck, even though his windows grew hot enough to burn skin and the cab was uncomfortably warm even as the air conditioner blasted on its highest setting. He came to terms with knowing he’d probably die in his truck and recorded a goodbye video for his family as the vehicle’s paint blistered and blackened, but was saved by Joe Kennedy, a Cal Fire bulldozer operator, who emerged from the blazing trees to shove disabled cars out of the way so that Pierce and other drivers could escape. (The ICU manager chose to turn around and return to the hospital.)

By mid-morning on the 8th, flames had consumed Paradise’s Safeway, the Skyway Villa RV Park, the Adventist church, Paradise Elementary School, and the homes of the mayor and fire chief. The school’s playground structures melted.

The fire moved so fast and burned so hot — its radiant heat reached 1500 degrees F, the temperature of a crematorium furnace — that residents couldn’t outrun it on foot and were immolated in place. Victoria Taft refused to accept her daughter’s pleas to leave, even after a neighbor alerted her that she needed to evacuate, because she hadn’t received any such notice from authorities. Andrew Downer, who was confined to a wheelchair, told his girlfriend, Iris Natividad, three hours away in Santa Rosa, “Maybe this is a good day to die.” His remains and part of his wheelchair were found on the front stoop of their home, where he had fruitlessly waited for firefighters to rescue him before the wall of fire overtook him.

Longtime Paradise resident John Shipman couldn’t bring himself to leave the town he’d called home since childhood, so after making sure his daughter, Skye, got out safely, he helped local firefighters work recon, then hiked to a restaurant and local landmark called the Depot, which was connected to his home by a dirt driveway. When the fire surrounded the restaurant and firefighters sped away with hoses trailing from the tanks, Sedwick vanished along the driveway, boxed in by flames, where his remains were later found. For some reason, he couldn’t bring himself to leave Paradise, even if it meant burning alive.

Since many evacuees followed the instructions of 911 operators to leave pets behind, Jeff Evans, who owned a pest-control company, temporarily assumed the role of Doctor Dolittle. He ended up with four mules, more than a dozen ducks, and eleven dogs, most hauntingly a black border collie named Bella, who had been tied to a tree near a trailer, which was obliterated in the inferno. She dug a shallow pit and sheltered from the flames as best she could, although she was badly burned. However, she happily allowed Evans to rescue her and soon learned to stand in front of the refrigerator whenever Evans opened the freezer, knowing he was unloading cold packs for her burns. Her owner ended up asking Evans to keep her, since he knew he’d be a better pet parent, and she fully recovered under his devoted care. He says Bella is “the most wonderful animal I’ve ever owned.”

Cal Fire chief Ken Lowe, his crews, and a crowd of civilians were trapped at a wide intersection surrounded by the firestorm. He ordered the five firetrucks to form a pentagon-shaped barrier to shelter the hundred citizens and their pets, which unquestionably saved their lives. Paradise police officer Rob Nichols found himself caught in an even more dangerous location – between two businesses with large propane tanks on one side and a sporting goods store packed with ammunition on the other. He herded stranded motorists into a tin-roofed group of stucco structures, including a bar, where they sheltered for several hours and scrambled for snacks and soft drinks until it was safe to leave.

While the Camp Fire is in many ways a tale of unimaginable heroism, it is also a story of unbearable loss, of lower- and middle-income families losing the last affordable homes in California, of stress killing residents long after the flames were doused. Emotionally scarred, many Paradisians scattered around the world, moving as far away as Virginia, Puerto Rico, and Micronesia, although FEMA estimated that 16,500 of the 50,000 evacuees returned. Many older residents died in the months after the fire, their bodies claimed by cancer, strokes, and heart attacks. Father of three Chris Sanders, whose wife Rachel and newborn Lincoln were evacuated from the hospital just a few hours after Rachel’s c-section, died of leukemia less than a year later.

Guardian journalists Alastair Gee and Dani Anguiano have written an arresting account of the worst wildfire in American history, one which will hold its own amongst the many volumes of United States disaster reportage.