The Claw and Warder series is Erik Henry Vick’s fond tribute to the long-running original Law & Order series, and Leery Oriscoe is based on Lennie Briscoe, the detective portrayed by the late Jerry Orbach. Each book begins with a statement similar to the one that precedes each L&O episode, although Vick’s changes with each novel.

In the Locus of New York, crimes committed by magical entities threaten the delicate balance between the mundane world and the supernatural realm. The dedicated teams of detectives who investigate these breaches of Canon and Covenants are members of an elite unit known as the Supernatural Inquisitors Squad. These are their stories. 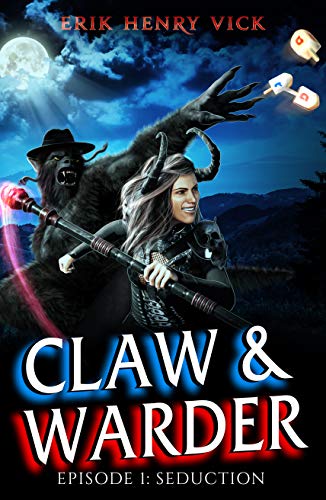 Two women walking through Riverside Park find a dessicated body in the underbrush along a walking path.  This particular crime is clearly paranormal and handled not by the human New York Police Department, but by a subdivision of the Twenty-Seventh Precinct known as the Supernatural Inquisitors Squad (the humans call it the Special Investigations Squad), which solves all the paranormal homicide cases in New York City – or what the the SIS calls the Locus of New York.

The detective assigned to the parched-corpse case is Lerome “Leery” Oriscoe, an Hasidic Jew who also happens to be a werewolf. He functions as a Claw – his werewolf side provides the muscle –while his new partner, Dru Nogan, is a Warder, who uses her wizardry skills and magical charms to protect him.  Although she admits to being a succubus, she’s tight-lipped about her background and doesn’t like coffee unless it’s heavily sugared. The latter offends java junkie Leery, who quaffs the black magic in astonishingly inhuman quantities and knows the locations of all the best Starbucks.

Their boss, Lieutenant Epatha Van Helsing, is not only a descendant of the famous vampire hunter, but a ghost who habitually sneaks up on those under her command.  She and Dru get off to a rocky start, as Van Helsing is acutely aware of Nogan’s parentage – specifically, her father – and doesn’t trust her newest charge. Nor is she happy that Dru made detective in half the time she did, although Van Helsing doesn’t factor in the eras in which the two women advanced (Van Helsing’s was a century ago).

The corpse turns out to be the 19-year-old nephew of the Irish ambassador, which makes the case a bit sensitive.  However, her behavior and that of the creatures who actually carried out the execution raises the hackles of the detectives and Executive Assistant Locus Magister Sam McCoy, which brings to light the unusual spell and creature responsible for the crime.  Even against a talented defense attorney like Tovah Melnick, McCoy and his assistant, Angie Carmichael, deliver a slam-dunk prosecution, although a disagreeable judge like the Honorable Aleister Crowley (yes, the late British occultist) complicates issues … until Detective Nogan is called to the stand, when the cranky judge suddenly demonstrates exceptional deference to the witness, who, clearly accustomed to such reverence, politely but nonchalantly addresses him by his first name.

Erik Henry Vick has delivered not just a great supernatural Law and Order tribute, but a complicated and well-structured beginning to what promises to be an entertaining paranormal police series.