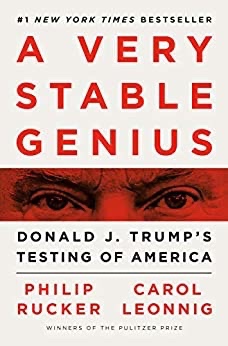 When Donald Trump famously boasted on the campaign trail that he was “a very stable genius,” a claim he made at least four more times, not only did he reveal his narcissism and insecurity to the world, but he handed Pulitzer Prize-winning reporters Carol Leonnig and Philip Rucker, employees of the Washington Post, the title for their insightful and disturbing book. Its 466 pages compile a portrait of a commander in chief whose venality, insecurity, narcissism, prevarication, impetuosity, and selfishness form a man psychologically, physically, and morally unfit to serve as the 45th president of the United States. His victory was won not by the popular vote, but the Electoral College, a constitutional invention intended to prevent a person like Donald John Trump from ascending to the most powerful political position in the world.

Rucker and Leonnig document all Trump’s famous misdeeds within the covered time period, but what distinguishes their book is the solidly verified behind-the-scenes behavior surrounding his conduct (included in 38 pages of notes and indexing). They begin with his appointment of Michael Flynn as National Security Advisor, a choice so volatile that New Jersey Governor Chris Christie, who was chairman of the transition, warned him not to hire the retired general. When Trump asserted that Christie just didn’t like Flynn, the governor agreed that was true, but wasn’t the reason he advised against hiring Flynn. “He’s going to get you in trouble,” Christie presciently advised. “Take my word for it.” Days later, however, Trump fired Christie at the request of his son-in-law, Jared Kushner, who had never forgiven Christie for imprisoning his father, Charles, for tax evasion and other crimes when he was New Jersey’s attorney general.

In between are Trump’s outrages, such as the sudden announcement of the Muslim ban, the “shithole countries” controversy, the semi-public domestic conflicts of George and Kellyanne Conway, and the antics of Steve Bannon, Reince Priebus, Mick Mulvaney, Rob Porter, and Stephen Miller. Also detailed are the intense frustrations of John Kelly, Jim Mattis, H.R. McMaster, and John Bolton, as well as nameless aides and assistants who endured Trump’s tantrums, mockery, bullying, and public humiliations, one of his favorite tactics. FBI director James Comey is exposed as confidently sanctimonious, while Robert Mueller is surprisingly affable and scarily knowledgeable of staffers’ personal life, as detailed in a conversation with Bannon about his oldest daughter attending West Point, which left him feeling “a little spooked.” As the authors report, “[Bannon] thought about how much homework Mueller must have done to study up on a Trump aide he wasn’t even scheduled to meet. ‘This guy is so fucking good to do the research,’ Bannon thought to himself.”

The book ends with the release of the Mueller report and Trump’s infamous phone conversation with the newly elected Ukrainian president, Volodymyr Zelensky, in which he openly asked for help in gathering dirt on Joe Biden. “By the fall of 2019, “ the authors note, “Trump was acting as if he were convinced of his own invincibility, believing that he could wield the vast powers of his office in pursuit of his personal and political goals without accountability. He genuinely believed that his interests came first and that, as president, he was above the law.”

A Very Stable Genius is a harrowing, shocking read — if it was published as fiction, it would be rejected as too outlandish — but a necessary one for all Americans vested in the restoration of democracy and constitutional enforcement. To paraphrase Leonnig and Rucker, we will all be chastened by history.

Audiobook: After introductory commentaries by Leonnig and Rucker, Hillary Huber offers a marvelous performance . Although she never tries to imitate any of the participants, she clearly conveys their personality and voice through her nuanced interpretations, which renders the book even more frightening for those who value the democratic process. Misdeeds, judgments, decisions, and actions are amplified by her calm but forceful narration. This is not an audiobook to fall asleep to, as readers’ dreams will be haunted by visions of White House misconduct. (Don’t ask how Book Review Gal knows this.)

Immersive reading (listening to the audiobook and reading the book at the same time) is especially effective for A Very Stable Genius. Just make sure you have a well-stocked home bar and perhaps a fast-acting tranquilizer prescription nearby to steady your nerves after a session.