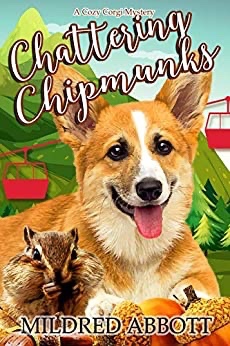 As Leo and Fred are celebrating her birthday week, they see a body drop from the Chipmunk Mountain tram as they’re on their way to enjoy a sunset picnic. Turns out it’s private investigator Austin Poppy, whose rental car is filled with junk food wrappers, wads of discarded paper, and a list of all but two of Estes Park’s town council members.

As Fred, accompanied by her ever-faithful Watson, examines the evidence and follows the leads, she finds more suspicious behavior than she could have anticipated. Is the distasteful Ethel Beaker attempting a coup? Is Bobby Castle, who’s devoted to mountain owner Elmer Walton – and whose son Rocky has crashingly sought out Fred to clear his name – concocting some sort of overthrow? What about B&B owner Meisel Pepper, who’s regretfully renovating Pinecone Inn‘s dining room using the edgy – and nerve-wracking – Ebony Gerber and wants to turn Chipmunk Mountain into a luxury shopping destination to rival Aspen and Vail? And will Watson ever forgive Leo for making him ride on the tram? What Fred finds will shock Estes Park to its core, leaving unanswered the ultimate question: just how well do small-town residents know their neighbors?

Mildred Abbott has produced another stunning Cozy Corgi mystery. Instead of losing steam, she picks up the pace with every book.