Give a brief summary of your life till now and how it led you to write.

I was born and lived much of my life in New Orleans before my AT&T job moved me to multiple cities, but I always bounced back to New Orleans. I write a cozy mystery series set in New Orleans called The New Orleans Go Cup Chronicles.

In January 2017 I organized a Sisters in Crime chapter in New Orleans, was elected President and planned a Mystery Writers’ Conference for November 2019.

In New Orleans, I’ve been active in many Mardi Gras krewes, super krewes and organizations, and belonged to the Krewes of Cork, Orpheus, Iris, Tucks, Joan of Arc and the Halloween Krewe of Boo. I say I’ve never met a parade I didn’t like!

What and who inspired the Go Cup series? What prompted naming Brandy after a popular drink? (which is a great twist, by the way!)

The series was originally an idea for one book. By the time I was halfway through writing it, I had the idea for the next book. I lived and worked in New York City for a couple of years, and my co-workers loved to hear what crazy things we did in New Orleans. One particular tradition they found amusing was kissing a stranger at a parade for a paper flower. We really do that in New Orleans and that’s how the first story starts.

I worked with a lady whose last name was Alexander and she named her daughter Brandy. I thought it sounded very New Orleans and it stuck with me. I decided it was going to be the name of my main character.

I say I’ve never met a parade I didn’t like!

Yes, I am involved with Schnauzer Rescue of Louisiana. I started as a volunteer. The couple who founded this rescue suddenly had two small children and parents who needed their care, so I took over the directorship so the rescue could continue. That was almost 20 years ago, and I’ve loved every minute I’ve had a rescue in our home and working to find wonderful people who adopt them. We are a very small rescue with only two volunteers besides myself. From time to time I do get foster volunteers for rescues until I can find them a fur-ever home!

Brandy is an extremely independent, intelligent career woman who makes time for love in her life, but has no time for careless men. Did you base her on anyone you know or is she solely a creature of your imagination?

Brandy is a New Orleans lady in every aspect. In New Orleans, it’s all about contacts and connections. Brandy is based on a combination of several people I’ve known throughout my life. She’s fun, serious, takes care of herself and her friends.  She is pretty much your typical Southern Catholic girl. 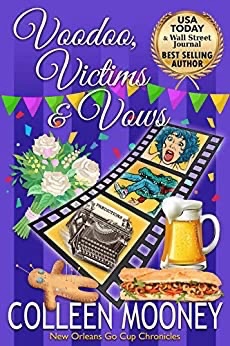 Do you have a planned length for the Go Cup series, or will you let it Brandy take as long as she needs to tell her story?

Funny you should ask that. I’m trying to decide whether to write another Brandy mystery or break off the series with a character in book 9 which is about to be released. The name of it is Croissants, Crimes and Canines and should release in December. It will be up for preorder shortly.

I do have something in mind to write a true crime story and am working with an arson investigator on a case he solved and wants the story told.

Well, if it’s the Brandy mysteries, I go to the location I want to use and get the feel of it.  Since I grew up in New Orleans I know all the places and businesses I write about, but I fictionalize them in my stories. I will look up addresses of old places, like the Ice House in the French Quarter in Book 1. I used that location since it is no longer an ice house but is now a warehouse.

My writing routine is mostly done in two places, my in-home office that has a wall of windows that I look out a wee bit too much at birdfeeders my husband has attached to those windows, or at a condo my husband and I own in Florida.

The condo came along after we lost our home in Katrina. Right after we rebuilt we had another hurricane bearing down on us and we had to evacuate the home we just moved back into. We evacuated to Florida where my sister has a condo and I decided I would buy one near her so if I had to leave New Orleans I have a place there to go and if the hurricane is headed to Florida, then I stay here.

I do get my best writing done in Florida … fewer interruptions. I type everything but will leave myself voicemail ideas when I’m not at my computer. 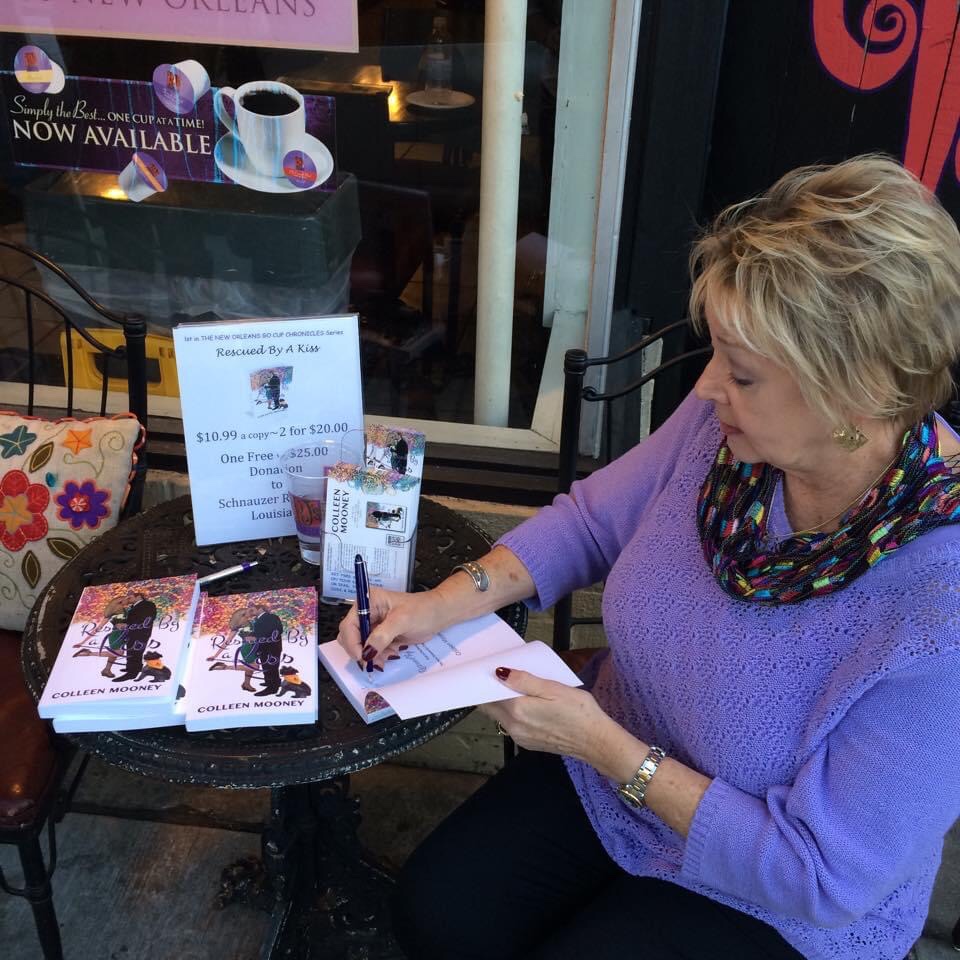 I have a general idea of the crime and how it will be solved as far as outlines go.

Then I let the characters do their thing. I like it when I get a new character in the mix who surprises me with some things they contribute to the story.

I read a lot of different books, so it’s hard to pick one or two writers I really like. I do like international thrillers and mysteries. Recent books I have really enjoyed lately have been I Am Pilgrim by Terry Hayes and A Gentleman in Moscow by Amor Towles.

I always worked for a large company where creativity was encouraged as long as it supported what management had in mind. So much for corporate America. I love the idea that I can write what I want and there’s no one to tell me that’s a good idea or a bad idea.  I love the creative process and independence that comes with writing a story. The story always entertains me and characters surprise me. A friend once told me after reading my books that I had to make Brandy pick the man she liked. I told her I can’t make Brandy do what her character won’t do.  She looked at me like I was crazy.

Writing is a second career for me after a lifetime in sales and marketing, so there’s nothing I don’t like about it.  It frees me mentally and creatively. 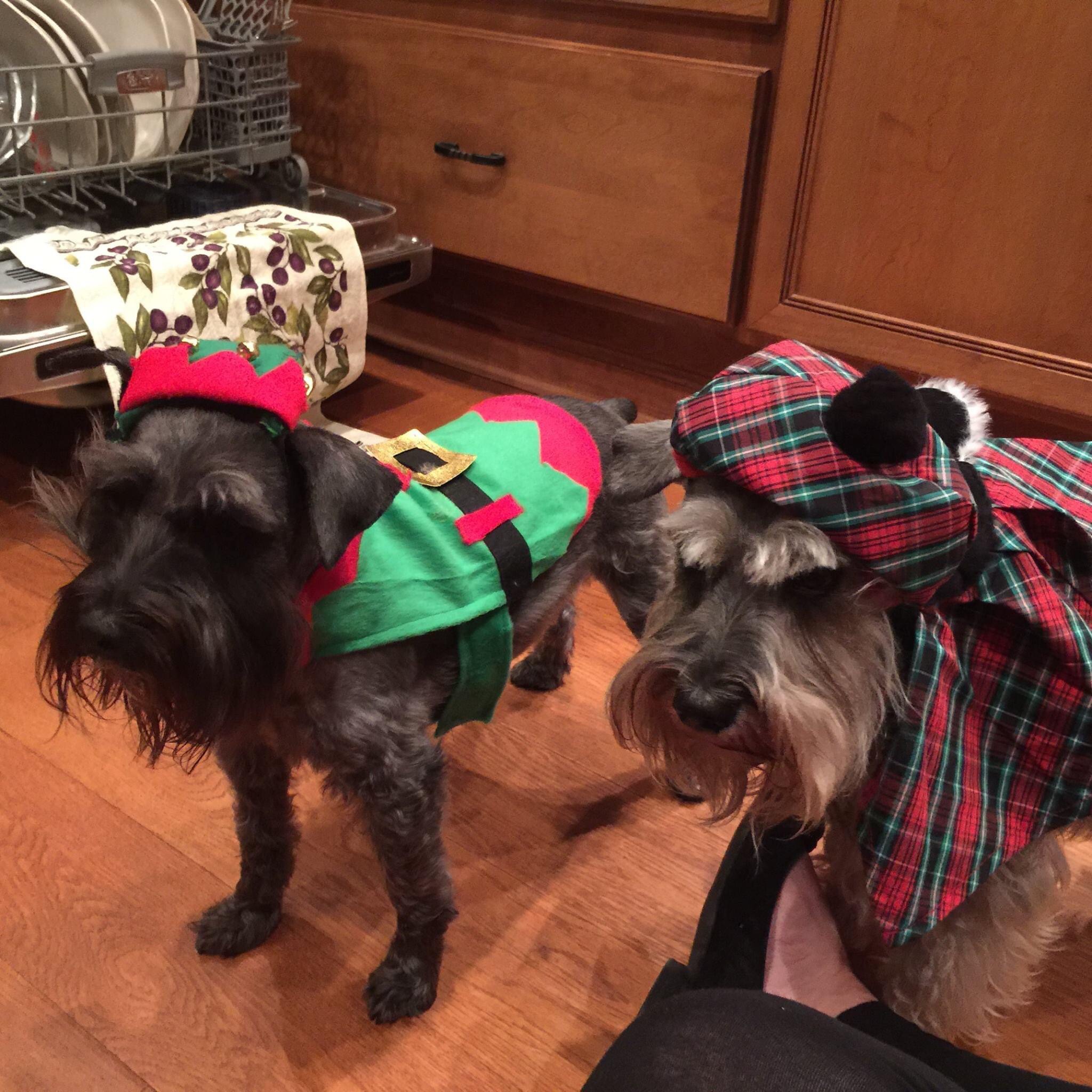 Even before I was in rescue, I’ve had four Schnauzers over the years. People would call me when they knew there was an abandoned dog, and I would take it. When I got up to four, I decided I needed to find out what rescue was all about.

I always had female schnauzers. One male came into rescue when I first started, and we kept him because my husband said no one was good enough to adopt him.  He had gotten attached, but then Meaux got attached to me. He is the dog in my stories. In fact, all the dog names in my books have been rescues. Meaux Jeaux (MoJo – it’s a New Orleans thing) has been gone three years, and I was down to two rescues.

Then a lady who had taken several special needs dogs from me over the years died unexpectedly. I took back the two rescues I had placed with her. One was a special needs dog because she was blind. I had an eye replaced with a fund-raising drive. I cried for a week when this lady adopted her and had her five years. Tweezer came back to me with her companion Murphy, and I am very grateful and happy they did. While I love dogs, there’s a special place in my heart for schnauzers. My dogs’ names are Tweezer, Murphy, Mauser, and Moonpie.

Also, when I worked and relocated to several cities with a major telecom company, I realized how different we are in New Orleans with traditions, festivals and just how we say things. I asked for a po-boy sandwich in Birmingham, Alabama, dressed. The man said he didn’t know what I was saying. A po-boy is a sandwich on French bread and dressed means with lettuce and tomato. Nothing-on-it means hold the lettuce and tomato. 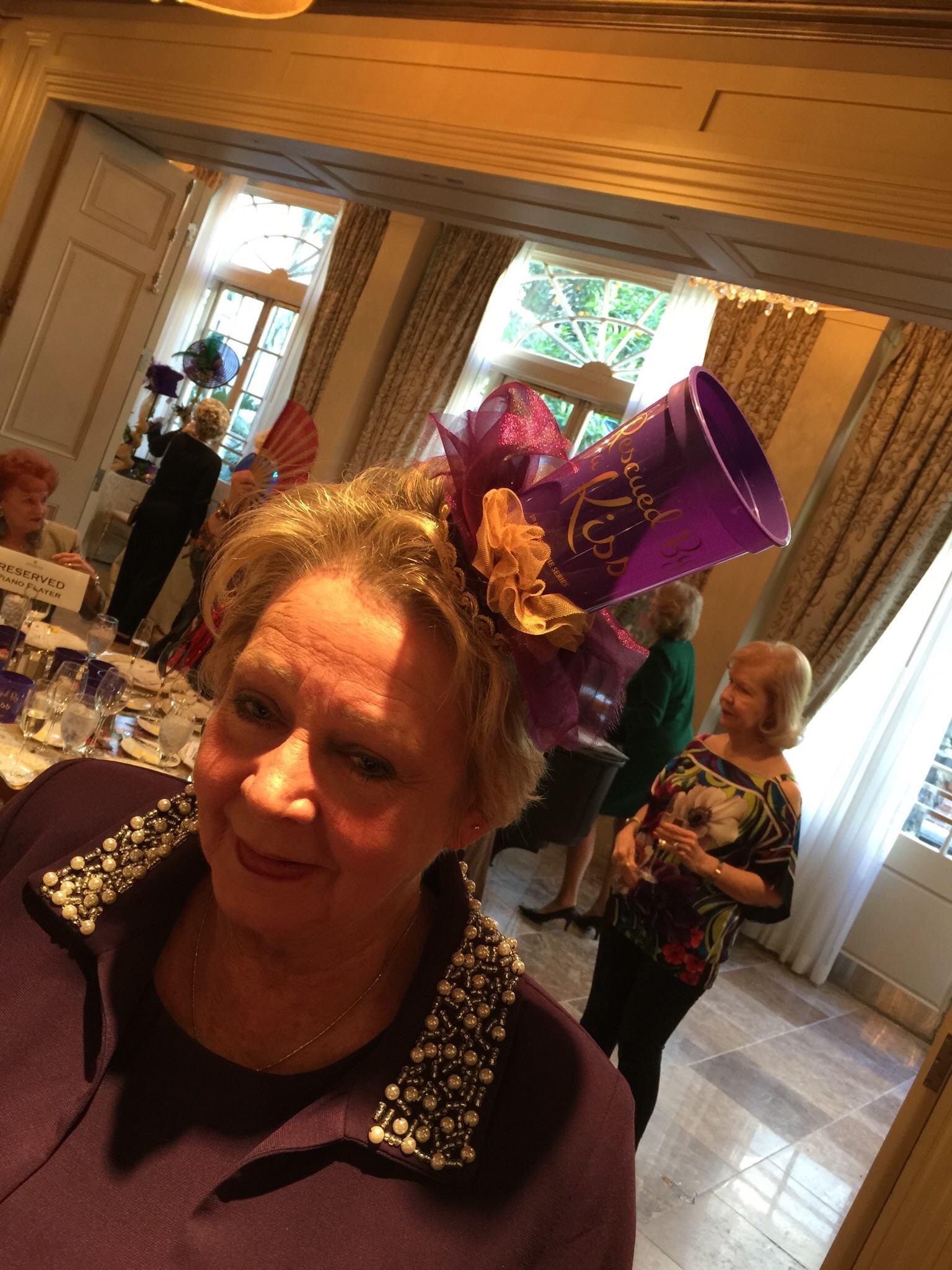