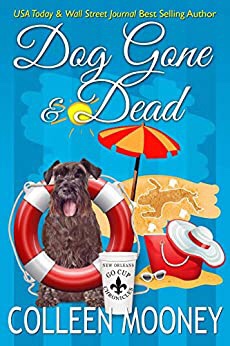 Brandy Alexander and her boyfriend, Jiff Heinkel, are set to enjoy a long weekend in Navarre, Florida when, on an early-morning beach walk, they find a dead woman under the pier clutching a leash embroidered with the name Rascal and a rendition of a schnauzer.

Although they’re supposed to be relaxing away from the hullabaloo of New Orleans, both start sleuthing to discover the identity of the dead woman and why she was murdered. Brandy is especially concerned about Rascal, fearing he’ll be hit by a car or captured for use as a bait dog.

After a day of conferring with the police and looking for the dog, they make their way to the Pensacola Marina, where they meet Jiff’s law school friend Daniel Becnel, who left lawyering for the life of a charter boat captain. Tonight Jiff’s hired him to take them on a sunset cruise, and who should be hanging out with Daniel but Rascal? He claims he found the little guy in the parking lot of a marine store several miles away.

As Brandy and Jiff continue their investigation, they meet a shady special agent, a pair of sensible sisters, a woman claiming to be the sibling of the dead woman, and an Air Force MP with an interesting side gig. They’re also chased by prison-tatted enforcers trying to snatch Rascal, who holds the key to an illegal empire, and discover the reason the woman under the pier was killed.

Alyson Krawchuk is the perfect narrator to bring Brandy to life. Her Southern accent is sweet but not syrupy, and her pace is excellent. This is the perfect audiobook for immersive reading, as Ms. Krawchuk’s voices blends perfectly with the words on the page, or standalone listening.