A Keeper — E-book and Audiobook Read by the Author, Graham Norton 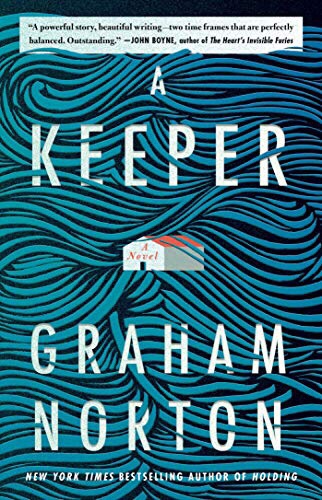 Graham Norton’s second novel, A Keeper, moves from Holding’s drama in a small Irish town to domestic terror in the harsh Irish countryside. After her mother Patricia’s death, Elizabeth Keane is settling her affairs in Buncarragh, Ireland when she finds a small packet of letters that propel her back to the 1970s, when Patricia was a lonely woman seeking love in the the Farmers’ Gazette, where she places an ad looking for a husband.

Amid the usual rude, crude, and outlandish replies is a sincere letter from Edward Foley, who lives in Cork. When Patricia takes the train to visit him, she finds a terrified man who can barely utter a single word. However, he continues to send her marvelous, expressive letters, and she continues to visit, which is how everything falls apart — or does it start coming together?

In the present, Elizabeth is a divorced single mother to 17-year-old Zach, and her marriage to his father, Elliott, ended badly. They now live on opposite coasts — Elizabeth in New York, where she’s a professor at Hunter College, Elliott in California, where he lives in relative indifference to his ex-wife and son. Zach is visiting him while Elizabeth handles final inheritance matters. Through long and tiring interludes, she finds clues to her birth, family, and mysteries of the past. The novel could easily be a third shorter — Norton relentlessly drags out the Edward & Patricia story like he’s paid by the word, and even the most eager readers will find themselves tempted to skip pages. But don’t, because the novel resolves in such an unexpected way that readers can watch each bit of information fall into its perfect place.

Norton also elegantly narrates the audiobook; as one of the world’s leading TV presenters and comedians, and author of what he’s reading, no other voice would convey the authenticity he brings to the book. He knows the text — he wrote it — and exactly how to read it out loud. Fans who love Norton’s fiction will enjoy an immersive experience.

It’s heartening to see that one of England’s funniest men can write solid, interesting novels that focus on his homeland of Ireland. A Keeper is worth the time it takes, which is a rarity in today’s literary world.