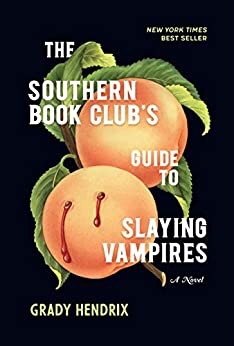 What would you do if an evil creature moved into your neighborhood?

That’s the oversimplified premise of The Southern Book Club’s Guide to Slaying Vampires. When the old lady at the end of the street has a stroke and can no longer live on her own, her nephew, James Harris, moves in with her. Not too much later, Patricia Campbell is out in the yard one evening and is attacked by the old woman, who tears off most of an earlobe. She dies soon after.

Patricia’s senile mother-in-law lives in the Campbells’ converted garage with her assistant, Mrs Green. She’s extremely wary of Harris, recalling that a man who looked a lot like him swindled her father and his friends out of a large amount of money in her youth. She never warms to Harris, despite his efforts, and soon she and Mrs Green endure a gruesome and frightening attack.

As Mrs Green tells Patricia about children vanishing from her neighborhood, Six Mile, and listens to the ready explanations James Harris offers for increasingly bizarre events, she begins to suspect Harris is not the benevolent neighbor he posits. Neither her husband nor any of her book club friends believe her when she lays out Harris’ strangeness, and they can’t be concerned with Black children disappearing from their homes on the other side of town. Everyone is sucked in by James Harris — a good-looking man who includes his friends in a money-making luxury housing development — until one friend sees him for what he is, but like Patricia, she knows no one will believe her.

What superpower does James Harris possess and what has he planned for the wealthy scions of Charleston, South Carolina? Grady Hendrix keeps readers on the edge of their seats through their journey of discovery.